PRODUCTION OF HYDROGEN, OXYGEN AND MOH GAS BY OFF-PEAK POWER

Such a production could take place near the 100% Government-owned "Kozloduy" Nuclear Power Plant (NPP) in Bulgaria, http://www.kznpp.org/index.php?lang=en ,

using unlimited water resource from the nearby-running Danube River, and the cheap night / off-peak Electric Energy produced by both 1000-Megawatt (1GW each) Reactors of the Power Plant, for which there is very low or no consumption during the nighttime and a lot of the power produced just wastes along the power grid.

Using the technology we have available, for Low-Power (12.3 kWh / kg H2) Water Electrolysis (LPWE), - https://fuels.alle.bg , or other similar technology, it's possible to produce over 150 metric tons per hour of 100% pure Hydrogen.

This hydrogen could be offered for export sales across the world, at the average market prices ( $10/kg in USA, GBP12/kg in UK) which would generate gross revenues of about $ 1,500,000 (a million and half US Dollars) per HOUR .

Production of clean fuels appears to be about 50 times more profitable than producing power.

What's more, construction and commissioning of both new 1000 MW Reactor Units of the new "Belene" NPP located near by, will double this revenue.

Belene NPP Project actually includes total of FOUR reactors of 1000 MW each, and there is a permission for additional 2 reactors 1GW each to be placed on the NPP Kozloduy's site.

World's consumption of hydrogen for 2018 was about 60 million metric tons (726 billion cubic meters) . Over 99% of this hydrogen is produced by reforming fossil natural gas, i.e. in an ecologically "dirty" way, while in our case we are talking about 100% clean, electrolysis-grade production.

World's Oxygen demand for 2018 was more than 350 Million metric tons.

Production, based on the above-mentioned technology, of Universal, 100% Clean and Renewable Hybrid-Hydrogen MOH Gas ( patented in 2008/2011 in Japan as Ohmasa Gas), would bring much more revenue.

In addition, the MOH Gas can be used as a 100% fossil-fuel substitute for Gasoline internal-combustion Engines, and can be 100% pressurized, pumped and safely transported along the existing Bulgarian Natural-Gas Pipeline Network, just like the Natural gas, liquefied or compressed. https://fuels.alle.bg

All the Coal and else Fossil-Fuel-Fired Power Plants could be converted not only to burn, but also to produce MOH Gas - https://coal-to-gas.alle.bg

A MOH Gas Refinery installation could also be built near the large underground Gas Storage Facility in the village of Chiren, etc., where huge quantities of MOH can be stored as a reserve.

If  Kozloduy and Belene Hydrogen-Production Projects show good results, more new NPPs could be built along the Danube river or else rivers and dams on the territory of Bulgaria, or else countries.
Seawater could be also used, after low-cost, SOH-Gas-Assisted Desalination. https://floaturbine.alle.bg
We are working with a group of investors also on a project for building alongside the Danube River's bank, a completely new 5GW Sovereign HPP, with 4 reactors 1.25 GW each, combined with a large H2-installation, for the purpose of hydrogen / oxygen / MOH production only, and no electric power for the country's power market.
This facility will use the Low-Power Water-Electrolysis Technology, which will produce 500 metric tons per hour of Hydrogen which will be exported at the price of  about $10/kg, thus generating gross incomes of about $35Bn per year. Also, the plant will produce 3,600MT/hr Oxygen for export, which will bring another $6Bn/yr income.
Such giant incomes will repay the investment in a few years.
We are discussing with scientists from nuke labs around the world the possibility this NPP to be the world's first one, using Thorium as a fuel, instead of Uranium. Thorium is much cheaper and more abundant, low-radioactive, waste-friendly and safer than the Uranium.
Not only NPP could be used as a power source for H2, O2, SOH or MOH Gas production and storage, but also Solar-Power or Wind-Power Plants.

PV Solar Power Plant and MOH Gas Fuel Storage System
The main problems with the solar plants are the occupational area and the short lifespan issues. NPP offers a more expensive power, but is a many times more compact and long-lifespan option.

One m3 of liquid MOH contains 167kg of Hydrogen, while 1m3 of liquid Hydrogen alone, contains 70kg Hydrogen only, or MOH is 2.5 times denser.

There is also an option for placing such a Plant on a Floating Platform, made of super-strong, lightweight, 100% stainless / sewater/UV-resistant and super-cheap Basalt-Fiber Composite (BFC) - https://floaturbine.alle.bg
Such a Floating Plant's cost will be much lower than a regular on-land one, with its need of buying expensive land plot and passing through tough Power Plant - Aproval Procedures. The Plant needs no Cable connection to the land and has its own MOH gas Engines for sailing to the best calmer-seas location with best solar-wind power-generating conditions. When all the H2 / O2 / MOH Gas Storage Tanks are full, the Platform sails to the closest safe port for replacing the full container tanks with empty ones. 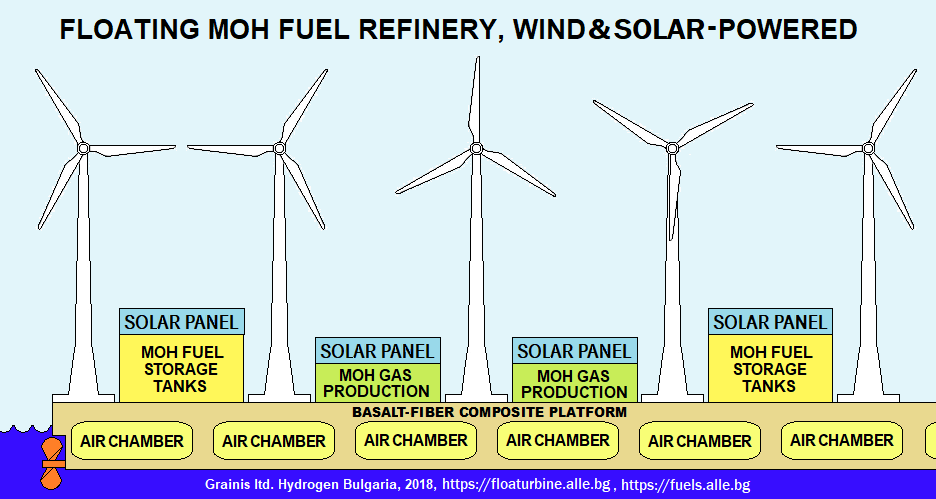 Similar Projects have taken place in the past, and are also on-going today. 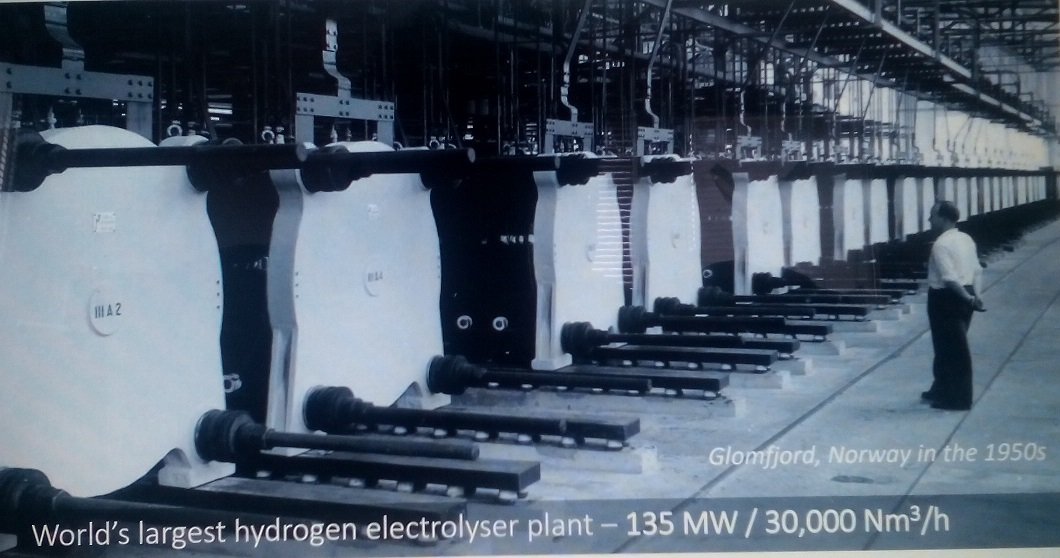 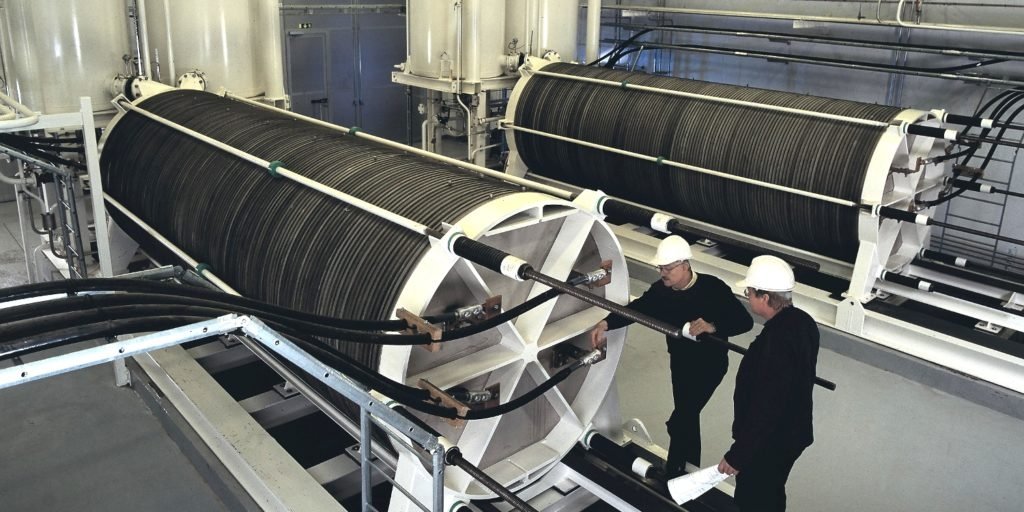